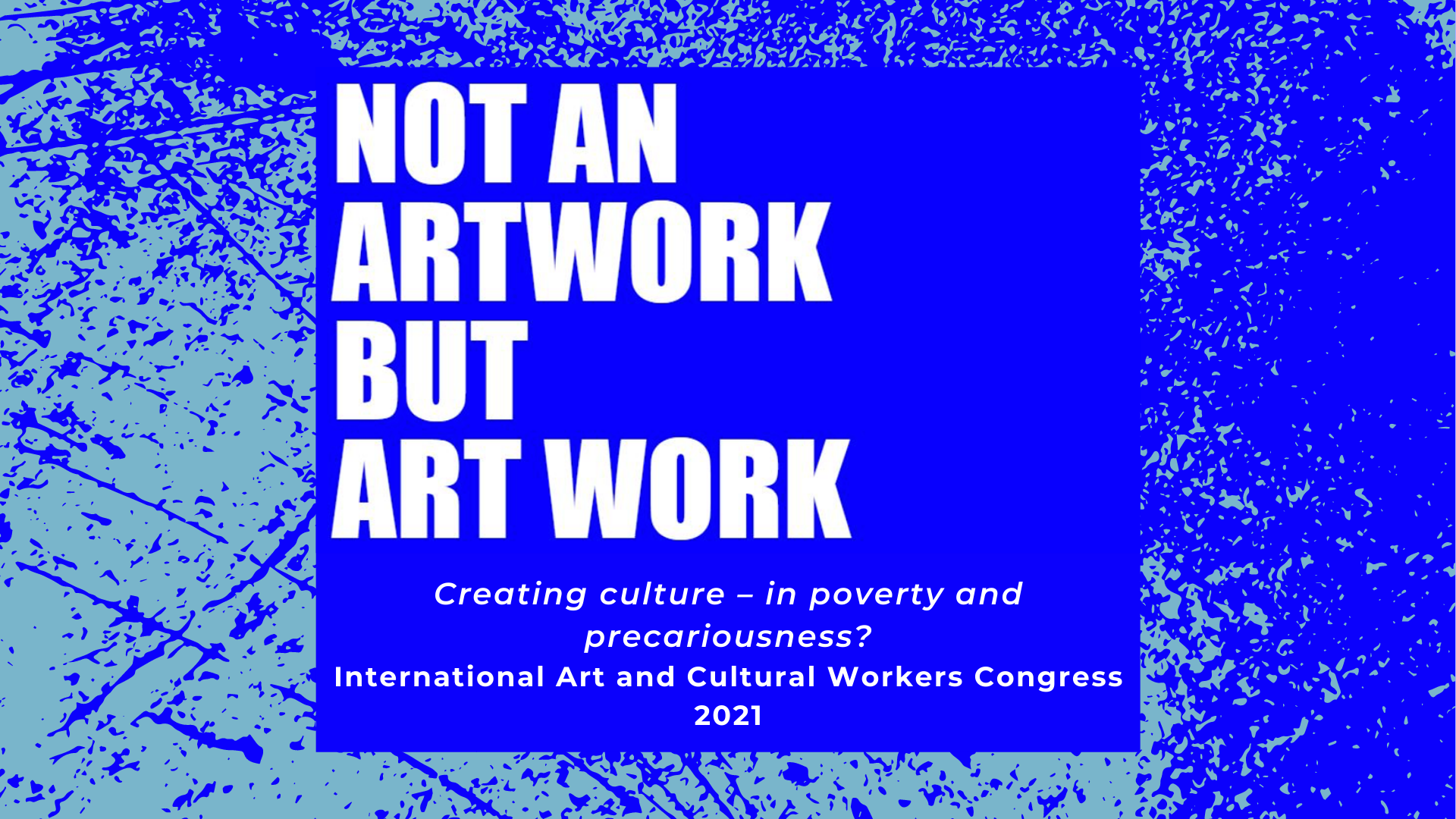 September 14, 2021 By Augustin Derado Comments are Off Croatia, inventculture

The prevalence of precarious working conditions in the sector of arts and culture across Europe were recently addressed by Art and Cultural Workers Congress, held in Zagreb between June 30th and July 2nd, 2021. The Congress brought together representatives of professional associations, initiatives, and trade unions active in promoting better working conditions for artists and cultural workers from seven European countries and the USA.

The Congress was organized by Croatian NGO-s and initiatives, most notably “BLOK” – a curatorial collective and political activist group. It is a part of the broader and ongoing struggle organized under the Croatian platform “Za K.R.U.H.” (For BREAD), which is demanding the improvement of the working conditions of cultural and media workers, and growth of the national budget for culture. Their recent activities included the petition demanding a fair wage and better working conditions for artist and cultural workers, addressed to the Croatian Ministry of Culture (available here)

Discussions and comparisons of the working conditions in the sector and the various models and possibilities for the introduction of fair wages, formed the axis of the Congress, along with the issue of political organization in the cultural sector. The domination of unrecognized, unpaid and poorly paid work, and the high risk of poverty for artists and other workers in the cultural sector was posited as symptomatic of the broader socio-cultural and institutional contexts, not only in Croatia but across Europe.

“Where, until recently, there were stable jobs, atypical forms of work prevail today, and with them a growing reserve army of cheap labour. A neoliberal invention, ‘project culture’ – quite contrary to the discourse in which it proclaims ‘democratization’ and ‘decentralization’ – has profoundly transformed the role of art and culture in society (…) artists and cultural workers are now exposed to insecurity, the risk of poverty and growing exploitation.” (Excerpt from the Invitation of the Art and Cultural Workers Congress 2021, Zagreb, available here)

The Congress was held in hybrid form due to COVID-19. The following speakers and associations/initiatives presented their viewpoints and participated in lengthy discussions with the audience:

Amongst the highlighted points of discussion were:

Relying (only) on the ‘project logic’ is counterproductive as it contributes to the misappreciation as well as partial invisibility of the work required for the realization of cultural products. In addition to the artists’ work, the project logic also makes invisible the work of many other workers in the art production chain. Rather than providing money for the projects, it would be better to fund the entire production process. The best solution would be the steady employment of artists and cultural workers.

Almost all the representatives stressed that the ‘project logic’ leads to cultural producers’ and NGO-s’ competing with one another. Given the limited amount of available support, this results in a ‘race to the bottom’, with devastating work conditions. A negative side effect of the ‘project logic’ is also that more work must be done in competing for money, reporting and administration, than in actual culture-producing activities.

Zoë Claire Miller represented the berufsverband bildender künstler*innen berlin (BBK) – a professional association from Berlin, which supports the needs of visual artists and advocates the enlargement of the state funds for culture. In her contribution to the discussion, Miller said that the association had met with some success in their activity. The work of the BBK led to the inauguration of the “Berlin model”, a special state fund directed to galleries and visual artist in the form of minimal mandatory fees. Despite that, the members are still faced with a very difficult situation, in which “most artists in Berlin are very poor and poorly paid”. Miller stressed that“90% of us face poverty in old age, with average pensions of 357 euros per month, which is definitely not enough to cover the rent in Berlin”.

Lidija Krienzer Radojević of the IG Kultur said that according to the study on the social situation of artists in Austria, commissioned by the Federal Ministry of Education, Arts and Culture more than 35% of artists in Austria live in poverty. Themajority of them are women. Likewise, “more than half of the institutions work in extremely precarious conditions”. To illustrate this, Krienzer Radojević mentioned that “more than half of the people working in the NGO sector earn an average of no more than 5,000 euros a year, which is far below the poverty line”⁺. She also highlighted the importance of larger cultural budgets, national and local policies for fair wages in the cultural sector, as well as housing programs for artists. IG Kultur is campaigning for Fair Pay initiative, advocating the regulations of fees for different jobs according to tariff classes.

Lise Soskolne represented a New York-based activist organization Working Artists and the Greater Economy (W.A.G.E.). She stressed that the organization recognizes how different the socio-economic context of USA is to that of Europe. In their context, the members are not in position to campaign for a living wage but aim to supply artists with tools and agency to negotiate fees or withhold content when they are not paid. Soskolne mentioned the organized irresponsibility in the unregulated field of the art market in the USA. She emphasized polarization of very high earnings of some artists and producers in American cultural industry and meagre earnings of most of the others. In a country where most of the artist don’t consider themselves as “workers” but as “freelancers”, unorganized and without any support, it is important to raise awareness of the importance of contracts and minimum payment standards in the cultural sector.

Ana Kutleša of the Croatian ZA K.R.U.H. (For BREAD) platform described the struggles which began in 2019 with “ENOUGH WITH THE CUTS!” initiative. This wasa broad and united front of cultural and media workers who demanded from the Croatian Ministry of Culture an end to reductions in public funding for culture. In addition to a budgetary increase for cultural activities, the platform also demanded greater transparency in allocating public funds. Among their demands was also workplace and social protection of all who work in the field of cultural and artistic production, as well as sustainable development of the cultural infrastructure. One of the most important demands was for public financing of non-profit media.

Ana Kutleša criticised the Croatian Ministry of Culture for its increasingly (neo)liberal policies. The criticisms included cutting funds for public culture, as well as not tackling the issues related to the poor state of cultural institutions and low wages in the sector. Kutleša especially criticized the ‘project logic’ of culture, putting cultural workers in constant competition, and resulting in the mentioned ‘race to the bottom’. This has led to the devastating work conditions in the sector, characterized by low pay (if there is any) and permanent insecurity. She emphasized that culture in Croatia has become a market and tourist product, and that cultural infrastructure from socialist times is decaying and crumbling, just as the idea of culture as a public good itself.

Vahida Ramujkić presented a report on the history and the current activities of The Association of Fine Artists of Serbia.  The Association has launched the project “Towards the Horizontality of Art”, which initiated a series of research campaigns on the problem of tax debts of independent artists, as well as their work and social status in general, and on the social role of art. The association has concluded that performing artistic activity in the existing socio-economic model is extremely unsustainable. Reduced to project financing, artists are denied fair conditions for receiving budgetary funds, since the state allocates only 0.6% of its budget for culture and treats artists as entrepreneurs, who need to fight for themselves in the market. The Association’s “FAIR ART PRACTICE” focuses on conceptualizing models for the systematic regulation of economic relations in the arts, according to fair exchange standards. By uniting in solidarity with other representative associations and advocacy initiatives, such as the Independent Cultural Scene in Serbia (NKSS), they managed to put public pressure on the competent institutions to send emergency funds to independent artists during the COVID pandemic.

Corinne Mazzoli and Alessio Mazzaro represented Art Workers Italia (AWI), the first autonomous and non-partisan association in Italy created with the aim of giving voice to contemporary art workers. The goal of the association is to raise awareness about the importance of art workers in the everyday life of their communities, and also to build ethical, contractual, and legal tools to protect them. The speakers emphasized that contemporary art workers are present in a capillary and stratified manner at all levels of national and international cultural production, with a significant impact on social cohesion, the intellectual and civic growth of the communities and important economic repercussions. They see a fundamental role of art workers within the local and global dynamics of cultural production. Therefore, they consider their current invisibility in the public sphere as unjustified and unacceptable.

Anahi Saravia Herrera and Dora Pocsai presented the work of grassroots trade union of low paid, migrant & precarious workers established in the UK in 2015. The United Voices of the World, Designers + Cultural Workers Sector battle outsourcing and demand that all members receive at least the „London Living Wage“, full pay and sick pay, dignity, equality, and respect. Speaking about the problems of the cultural sector, the speakers highlighted individualisation and competitiveness, both considered to be detrimental to the interests of the workforce in the sector. Cultural workers are made to compete against each other for unfair wages. This results in strong culture of competition and overwork, stress, and burnout, which have become chronic within the sector, and are closely connected with various mental health issues. The status of creative work is increasingly casualised, individualised and atomized, in the interest of distributing profits to those at the top. The speakers emphasized: “Our goal is to critically respond to the individualization of problems related to employment relationships, whether they arise in the context of employment or freelance engagement. We need to recognize that our problems are common, connect atomized workers, educate and support each other”⁺.

Lina Vergopoúlou and Myrto Delimikháli represented the Σ.Ε.ΧΩ.ΧΟ – Greek Union of Dance Workers, a collective organization of those who work in the field of dance, as educators, dancers, or choreographers. The speakers emphasized the unparalleled precariousness in the field during the COVID pandemic, leaving many on the verge of survival. The organization struggles against the Government policy by which culture is left in the hands of entrepreneurs aiming for profits, while the artists’ survival is seen as an individual responsibility. At the same time, there is not enough recognition of high educational demands and hard work of the dance workers. Likewise, there is not enough regulation and support in the sector, as employers often ask dancers to work without contracts and on minimal fees. Such a lack of recognition, regulation and respect is also reflected in the abusive behaviour towards dance workers, and violence – sexual or other, they often deal with in their workplaces. The union works intensively to protect dance workers and address any form of violence, as well as on trying to improve their dire economic condition and workplace problems.