HomeEuropean culture To Cancel or not to Cancel: How Cancel Culture Disqualifies people and productions from the cultural stages of Europe

To Cancel or not to Cancel: How Cancel Culture Disqualifies people and productions from the cultural stages of Europe 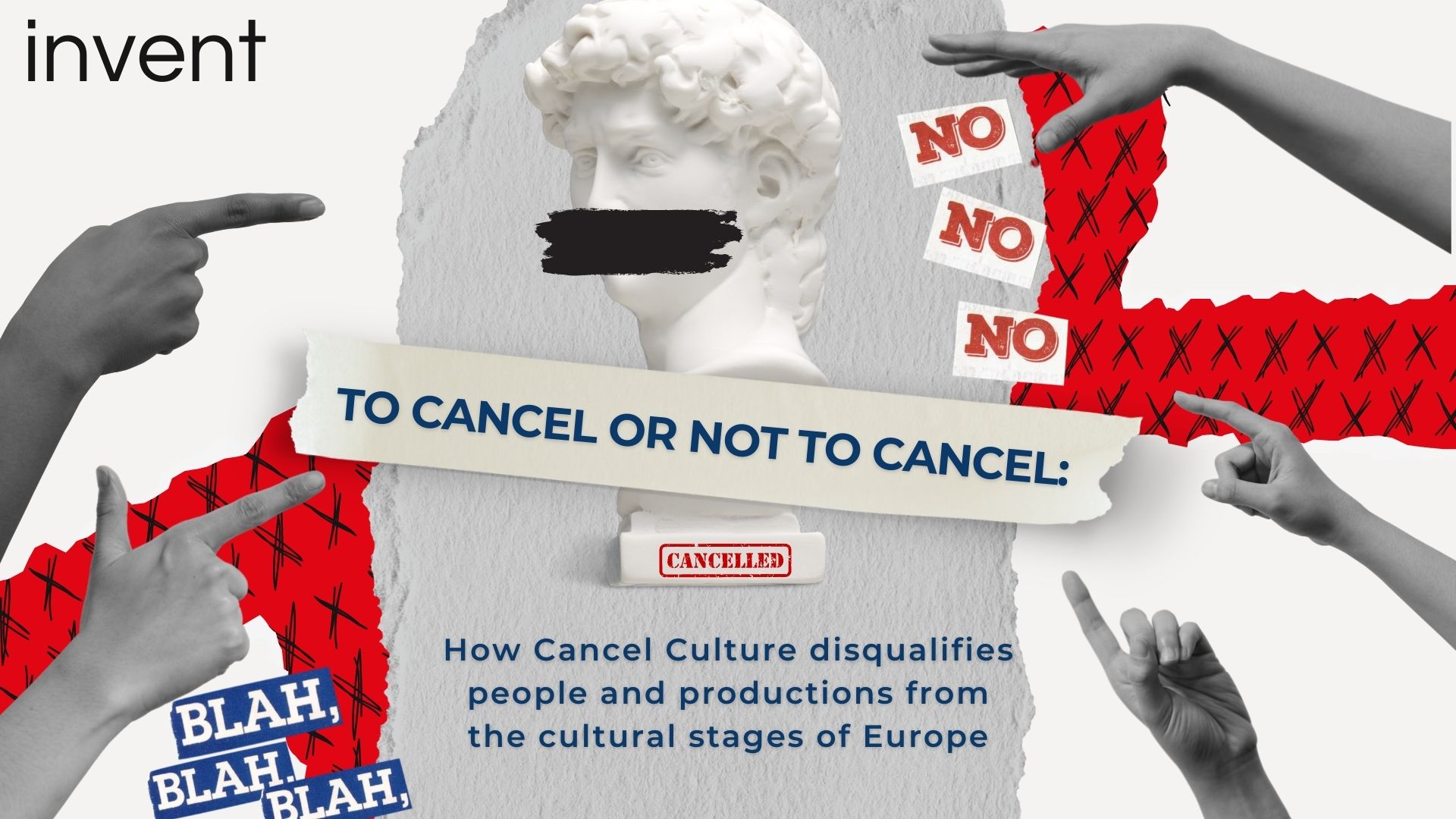 In the INVENT project we examine the cultural and social preconditions required for making European culture(s) more open and inclusive to all people. Our researchers have come across a myriad of cultural phenomena that – according to our respondents – should become more central and important to European cultural policies and the cultural offerings available to people. At the same time, we see that not everyone and everything is welcome to the cultural arena:  after allegations of immoral, transgressive or discriminatory behavior, cultural workers and their productions are increasingly ‘cancelled’ by their audiences[i] or by particular media.

In this blog we ask: how does this culture of cancelling work? What are the recent, most striking examples of cancel culture in practice?  In which countries did our researchers see a prevalence of cancel culture, and in which ways is this phenomenon subject to debate? Read about it in this blog, and feel free to share your experiences and opinions on cancel culture with us below in the comment section.

Have you ever been canceled? Hopefully not, because this cultural practice has developed into a powerful way to seriously dismiss a person or practice. Cancel culture has its roots on Twitter, where African American Twitter users started to use the term jokingly in 2015[ii]. Since then, its usage has evolved, being invoked in more serious contexts, in calling out, hating and shaming individuals for racist remarks[iii], sexual transgressive or other forms of violent or immoral behavior. By now, canceling is no longer a joke, but a cultural activist practice, intending to highlight the wrongdoings of those in power and to combat social injustice in cultural fields.

Today, cancel culture has become a media buzzword, with a myriad of subjects that are (declared to be) canceled: from artists to their cultural productions to entire parts of a cultural or historical canon. At the same time, scholarly understanding of this phenomenon is still at its nascent stage[iv]. To contribute to the understanding of cancel culture INVENT researchers have looked into Twitter discussions on canceling and cancel culture. By scraping large amounts of data from this social medium, on which we then performed a ‘topic modeling analysis’, we found that the cultural phenomenon of canceling was a trending topic, particularly in North-Western European countries, such as Finland, Denmark, The Netherlands, Switzerland and the UK.

Cancelling seems a way to draw particularly sharp moral boundaries: so sharp that persons or parts of culture may be cut off. This is also a main point of criticism to the phenomenon of cancel culture: that it withholds those that are canceled from an actual, fair trial. Critics state that trial by media should not become the norm, but that this is increasingly the case due to the highly mediated form of dismissal that canceling entails. Another point of criticism to cancel culture is that it impedes the possibility of an open debate. Advocates of freedom of speech see cancel culture as stifling the freedom of expression[v]. The cancelling of best-selling author J.K. Rowling and researcher Maya Forstater illustrate this tension.

The Case of Rowling & Forstater

Rowling came under fire early June 2020 for controversial tweets about the transgender community. In some of these tweets, Rowling stood up for Maya Forstater, a British researcher who lost her job following a series of tweets that were also criticized as transphobic. In these tweets Forstater criticized proposed changes to the United Kingdom’s Gender Recognition Act of 2004, which would allow people to self-identify their gender. She expressed concerns about the safety and privacy of women and girls in changing rooms, dormitories, prisons, and sports teams. In the online dispute that followed, freedom of speech advocates and transactivists stood head-to-head, the former stating that everyone has the right to express their own personal opinions in an open debate, the latter stating that Forstater’s statements were deeply offensive and discriminatory to the minority group of transwomen.

The fact that the trans-community is already marginalized and often discriminated against, is significant here: the activist view is that cancel culture is a legitimate way to hold people in power-positions accountable for abusing their power, while simultaneously taking seriously the perspective and experiences of the underdog: those that are disempowered, oppressed or victimized. It can be argued that this attention to power differences and abuse is important, especially in cultural fields. In sectors such as television, film, fashion and music, power is distributed highly unequally amongst professional groups, with often only a few people in power (producers, designers, directors) who decide over the chances for success of many others (aspiring models, starting music artists, actors) who are often in highly dependent positions. These dependencies and power-imbalances increase chances of abuse of this power. Not surprisingly, instances of transgressive behavior are increasingly coming to light in exactly these cultural sectors. Take as an example the recent controversy that took place surrounding a popular TV show in the Netherlands.

The Case of The Voice of Holland
In the winter of 2022, the Dutch version of The Voice was banned from national television, after a Dutch news show reported that two celebrity coaches and a band leader had sexually forced themselves upon multiple young and aspiring artists who participated in the singing competition over the years. Although it seemed almost impossible to stand up against those who can make or break your career, many victims have now collectively come forward with charges of sexual harassment and rape. The accused professionals in question have been shunned and shamed in national media and beyond, in their private lives as well. Relationships are broken off, their concerts cancelled, and their music no longer played by radio stations. The entire production of Voice of Holland is canceled from television for an undetermined time.

Do you want to tell us what you think? Is canceling a strong but justified way to nip injustice and abuse of power in the bud, or is it rather a form of censorship? Share your thoughts in the comment section below