Symbolic conflicts in Serbia: Novak Đoković and the Australian Open 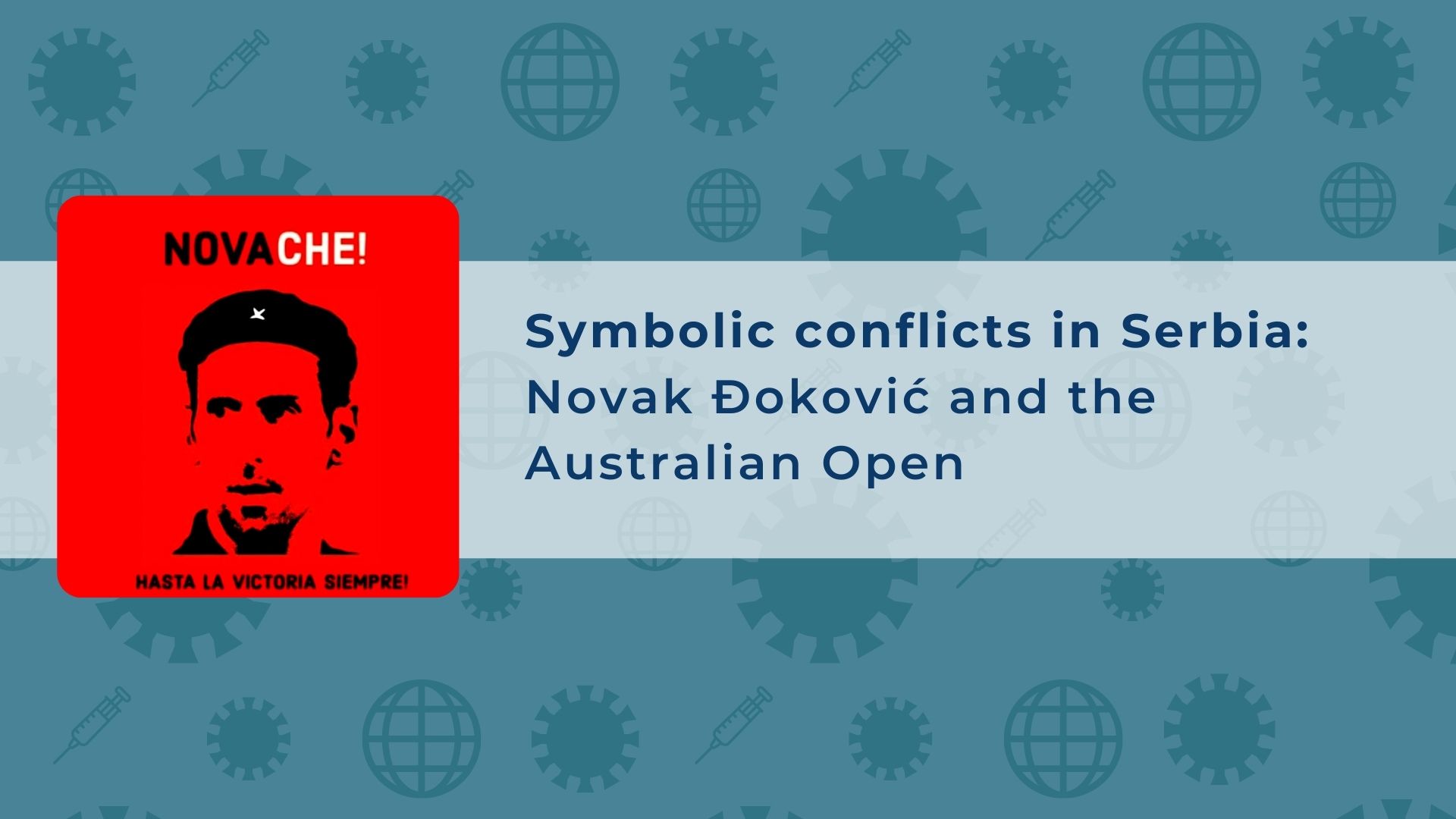 February 7, 2022 By Miloš Jovanović No comments yet

The contemporary Serbian society is deeply divided over the question of what and what kind of culture can and should have the status of legitimate – “valuable”, “true”, and “morally correct”. Conflicts over the “right” worldview have taken the form of Culture wars.

The multitude of “Serbian divisions”, with the inevitable simplifications, summaries and generalizations, can be reduced to the ideal-type opposition of the so-called First and Second Serbia. The division began in the early 1990s, with the beginning of armed conflicts in the former Yugoslavia, while Slobodan Milošević ruled unchallenged in Serbia, when a group of intellectuals began to call themselves the Second Serbia, in order to mark their opposition to the ruling politics and the dominant ideological and cultural paradigm.

The Second Serbia sees itself as civic, modern, liberal, cosmopolitan, urban and cultural. It wants to unequivocally separate and distance itself from the First, which is seen as nationalist, conservative, traditionalist, rural, authoritarian and primitive.

At the beginning of the 2000s, the need arose for the Third Serbia(s), i.e. variants of the First that could accept themselves, through a positive evaluation of what the Second rejects, through narratives of “seeking the middle ground between the extremes”, “in line with the new times”, and “acceptance of the real situation”. The Third one sees itself as a “true and majority Serbia” that is “closer to reality”.

Nole
The embodiment of the Third Serbia and its “most indisputable hero” is the famous tennis player Novak Đoković. “Nole” “sends a beautiful picture of Serbia to the world”; he is “finally something beautiful that has happened to us”, and he “combines modernity and tradition, national and global, patriotism and cosmopolitanism, Cyrillic and Wimbledon.”[1]

At the beginning of January 2022, there were intense conflicts in the Serbian public over the justification of the decision of the Australian authorities to finally deport Novak Đoković from Australia (after denying his visa, holding him in detention and a series of court judgement reversals). The topic dominated the media sphere so that the referendum for changing the Constitution of the Republic of Serbia (held on January 16) was entirely marginalized on the media scene.

The line of division of the conflicting parties in many points followed the demarcation of the First and Second Serbia, where the leitmotif of “Serbia’s struggle against the Western world” figured prominently (“struggle for freedom”, “opposition to tyranny”, “shame of the international community”). There were also comparisons of “Nole”, as a righteous and innocent victim, with Jesus Christ, as well as other examples of tragicomic idolatry of the famous tennis player, for which he could not be held responsible.

Đoković’s inability to compete at the Australian Open has reached the scale of a national tragedy in Serbia and awakened “dormant” but seemingly always ready, resentment nationalist narratives about the uniqueness of Serbs, and everything Serbian, that arouses the hatred of the whole world. A sense of “inferior superiority” was awakened, which was one of the focal points of the nationalist discourse of the 1990s. On this occasion, the most sacred “icon” of the Third Serbia was discursively appropriated by the First, and enthroned the idea of ​​Đoković as a defender of freedom and pride of Serbs from the “worldwide conspiracy” against them. Numerous caricatures, memes and other kinds of internet posts can serve as pictorial illustrations of this symbolic conflict.

On the other hand, many posts have appeared that have ridiculed the idolatry of Đoković. The satirical Facebook page “Follow the life of Novak Đoković minute by minute” appeared as a kind of a “hothouse” for these. Novak’s alleged concern for spiritual (not material) values (in line with the classic condemnation of the Church with which Đoković was identified), his evasion of taxes in Serbia, and his stubborn refusal to vaccinate were all ironized, alongside the changed text of the referendum ballot:

Zooming out
There were also comments that read beyond the frontal story of the unvaccinated tennis player into the deeper layers, thus identifying less visible issues: the status of immigrants and their treatment, condemnation of different opinions/beliefs, relations of law and politics, media lynching power, etc.

In any case, this was a global media event that, due to problems with understanding the importance of vaccination, triggered different discourses about identities, all of which were shaped through discourses of: national vs. global; marginal vs. dominant; the Balkans vs. the West. The event, which illustrates the intertwining influences of globalization and the media in the context of the COVID-19 pandemic, which also caused numerous representations in the digital world, indicates the relevance and currency of the INVENT project agenda. Ultimately, a society that is deeply divided and polarized in terms of culture needs inventive cultural policies that will help reduce the evident gaps in its culture.[2]

[2] For more on the cultural conflicts: I. Spasić and P. Cvetičanin (eds.)  Us and Them – Symbolic Divisions in Western Balkan Societies (available at: http://cesk.org.rs/en/us-and-them-symbolic-divisions-in-western-balkan-societies/)